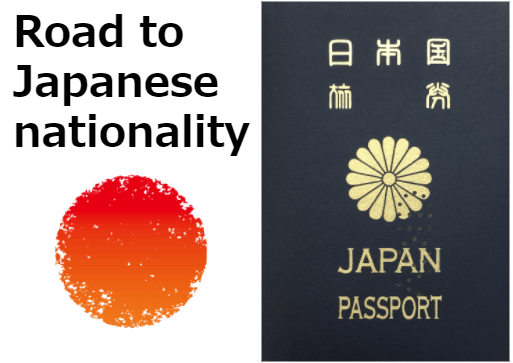 1. A child (excluding an adopted child) of a Japanese citizen who is having a domicile in Japan

2. An adopted child of a Japanese citizen who is continuously having a domicile in Japan for one year or more, and was a minor according to his/her national law at the time of adoption

4. A person who was born in Japan and is not having any nationality since the time of birth, and is continuously having a domicile in Japan for three years or more since that time

You can apply for naturalization, when you meet other conditions such as “Requirement of Behavior”, “Matter of loss of nationality”, “As to Thought”, and others.

2. A foreign national whose spouse is a Japanese citizen and three years have elapsed since the date of their marriage and who has continuously maintained a domicile in Japan for one year or more.

Even if you don’t have a domicile in Japan for five years or more continuously and are under 20, you can apply for naturalization, when you meet other conditions such as “Requirement of Behavior”, “Requirement of Livelihood”, “Matter of loss of nationality”, “As to Thought”, and others. 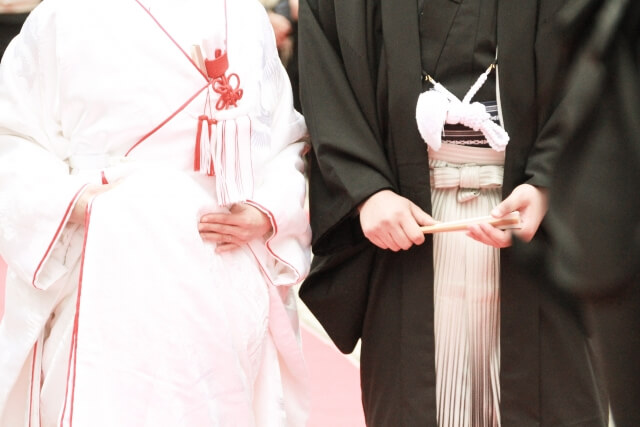 When you want to come to Japan as someone’s fiancé/fiancée, it is important for you to get the short term stay visa (90 days).

If you were born in Japan or your spouse is Japanese, please check this eased requirement.

In special naturalization, the conditions that will be eased vary from the applicant’s situation.

Part 1. The case that Requirement of Residence will be eased

1. A child (excluding an adopted child) of a Japanese citizen who is continuously having a domicile or residence in Japan for three years or more.

2. A person born in Japan, and continuously having a domicile or residence in Japan for three years or more or whose father or mother (excluding an adoptive parent) was born in Japan.

3. A person having a residence in Japan continuously for ten years or more.

The requirement of residence will be eased when the applicant meets any of above three conditions.

Even if you don’t have a domicile in Japan for five years or more continuously, you can apply for naturalization, if you meet other conditions such as “Requirement of Capacity”, “Requirement of Behavior”, “Requirement of Livelihood”, “Matter of loss of nationality”, “As to Thought”, and others.

A lot of people might be worried about how much money you need to have when you hear this requirement.

Of course, it is better to be wealthy, but it would be no problem if you are able to earn enough to live and eat like others.

It is even better to have property, bank savings, and qualification or skills that support your own living.

5. Matter of loss of nationality

When you are naturalized into Japanese, your own nationality will have to be lost or you have to give it up.

Don’t forget to check this matter because there is a case where some countries have conscription system.

In a word, they will refuse the application from the person whose idea is dangerous to Japan and Japanese society.

7. Being able to read and write Japanese

The required level seems to be elementary third grader’s level of Japanese.

There are foreigners who are learning Japanese hard in order to get naturalized.

After getting Japanese nationality, you can exercise your voting right.

To examine their public commitment and listen to political opinion broadcast, it is better to learn basic Japanese.

I provide information through my Facebook page, too.
Please keep your eyes on my page.

It means that a foreigner who has been living continuously in Japan for more than five years.

For example, a foreigner who lived in Japan for 3 years, and then lived overseas for 1 year, and again has been living in Japan for 2 years will not meet this condition.

This “five years” standard is considered to be the required period to be needed for you to settle in Japanese society.

“Address” means domicile in Japanese Civil Law and it means the base and center of your life.

A person must be over 20 years old and have legal capacity based on their national law.

This means that a person should be honest.

That is to say;
Paying taxes properly
No criminal record

When you have criminal record, a certain period of time has to be passed after serving penalty or sentence.

It is of course preferable not to have traffic accident and traffic rule violation.

Please confirm the appropriate time to apply for naturalization in the consultation at Legal Affairs Bureau if you did such a mistake in the past unfortunately.

Whatever types of naturalization you take, there is only one basic point.

Frankly speaking, it is “Being a person of good conduct”.

It is very simple.

Can you say “Yes” to this question with confidence?

“Do you live here without bothering Japanese society?”

If you can say yes, then, you submit the documents that explain that you meet the required conditions for naturalization.

You can say this is the application for permission to naturalization.

However, as I mentioned, permission depends on the discretion of the Minister of Justice, which means that we solicitors and immigration lawyers can’t give it to you.

Our job is to help you with your application smoothly.
Of course, to some extent, I can judge the prospect of whether the application will be allowed or not.

I will explain the conditions for naturalization later, but If you don’t meet conditions, there is almost no chance of getting permission for your application.

Even if you meet the conditions, you need to get the documents that can prove them.

Being able to collect the required documents is also important key point to success.

If you have any questions whether you meet the conditions, etc., you should consult with the person in charge of Legal Affairs Bureau in order not to spend your time and effort in vain.

For example, as to “Requirement of Capacity” in normal naturalization which I mentioned on the last article, judging from the phrase; “A person must be over 20 years old “, it seems that the person under 20 can’t apply for naturalization.

A person who is an adopted child of Japanese and has been having a domicile in Japan for more than one year continuously, and who was minor in his/her national law when he/she was adopted.

A foreigner whose spouse is Japanese citizen and who has been having a domicile in Japan for more than three years continuously, and who is living in Japan now.

I will explain these “eased conditions” later.

Normal Naturalization is the popular case that will be applicable to the one whose parents are foreigners. The conditions are as follows.

A person must be over 20 years old and have legal capacity based on their national law.

Being a person of good conduct

5 Matter of loss of nationality

7 Being able to read and write Japanese 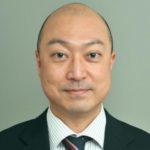